The Supreme Court recently granted certiorari in the Star Athletic, LLC v. Varsity Brands, Inc. case to resolve an issue that may heavily impact that more than $330 billion a year U.S. apparel market: is clothing eligible for copyright protection?  In order to answer that question, the Court must clarify the “appropriate test to determine when a feature of a useful article is protectable under §101 of the Copyright Act.”  Petitioners refer to this issue as “the most vexing, unresolved question in copyright law: how to determine whether a feature of a useful article — such as a garment or piece of furniture — is conceptually separable from the article and thus protectable.”  Courts appear to agree, as one appeals court had described this challenge as a “metaphysical quandary.”

Varsity Brands designs and manufacturers apparel and accessories for cheerleading and other athletic activities.  Varsity sought and received copyright registrations for “two-dimensional artwork” for a number of its apparel designs, including the following, which are the subject of the lawsuit: 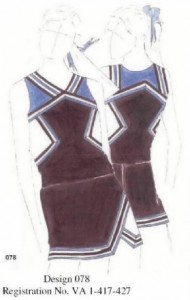 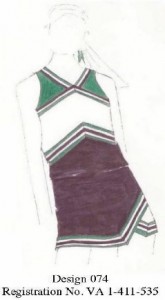 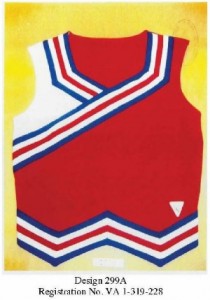 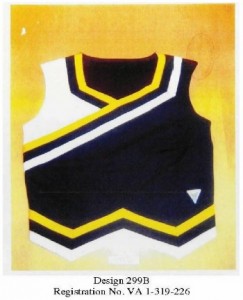 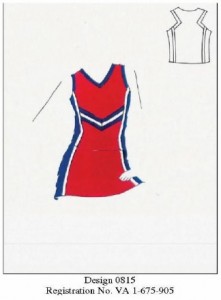 Star Athletica marks and sells uniforms for football, baseball, basketball, lacrosse, and cheerleading.  Varsity filed the instant copyright infringement suit when it noticed Star’s marketing materials for cheerleading uniforms that resemble Varsity’s registered designs above.  The Tennessee district court entered summary judgment in Star’s favor, concluding that Varsity’s designs were not copyrightable because the graphic elements of the designs were not physically or conceptually separable from the utilitarian function of a cheerleading uniform because the “colors, stripes, chevrons, and similar designs typically associated with sports in general, and cheerleading in particular” make the garment they appear on “recognizable as a cheerleading uniform.”  Essentially, the district court held that the aesthetic features of a cheerleading uniform merge with the functional purpose of the uniform.    Varsity appealed to the Sixth Circuit, which reversed.

The Sixth Circuit first held that the district court erred by failing to give greater deference to the Copyright Office’s registration determinations.  The Sixth Circuit then found that registrations were copyrightable under its newly formulated five-step “hybrid” test for determining whether an artistic design is separable from the utilitarian aspects of a useful article:

The Supreme Court will now review whether this “hybrid” test is appropriate to determine whether useful items, such as cheerleading uniforms, are copyrightable.   This decision will hopefully clear up the circuit split on this issue.